New Kings Democrats, our reform partners, and allies made our voices heard at the Kings County Democratic County Committee meeting Wednesday night, showing the power of what progressives can do working together. Thank you to everyone who came out! More than 70 Brooklynites wearing NKD T-shirts, stickers, and buttons traveled to Canarsie and made up nearly half of the audience at the meeting. Progressives are demanding more transparency and accessibility from the Democratic Party at all levels, and Wednesday night we proved that Brooklyn is no exception!

Last September, NKD and other reform clubs proposed rule changes to County Committee, following the process outlined in the Party rules to a tee, yet our proposed amendments were tabled and referred to a Special Committee on Rules. This group, comprised of members selected by County Committee leadership, modified and voted on these commonsense reforms behind closed doors (at a meeting where zero women were present!), then referred the modified amendments to the Executive Committee for consideration, also behind closed doors. While this meeting of the Executive Committee happened immediately prior to Wednesday night’s County Committee meeting, it remained unclear whether our local Democratic Party had voted to approve these reforms. 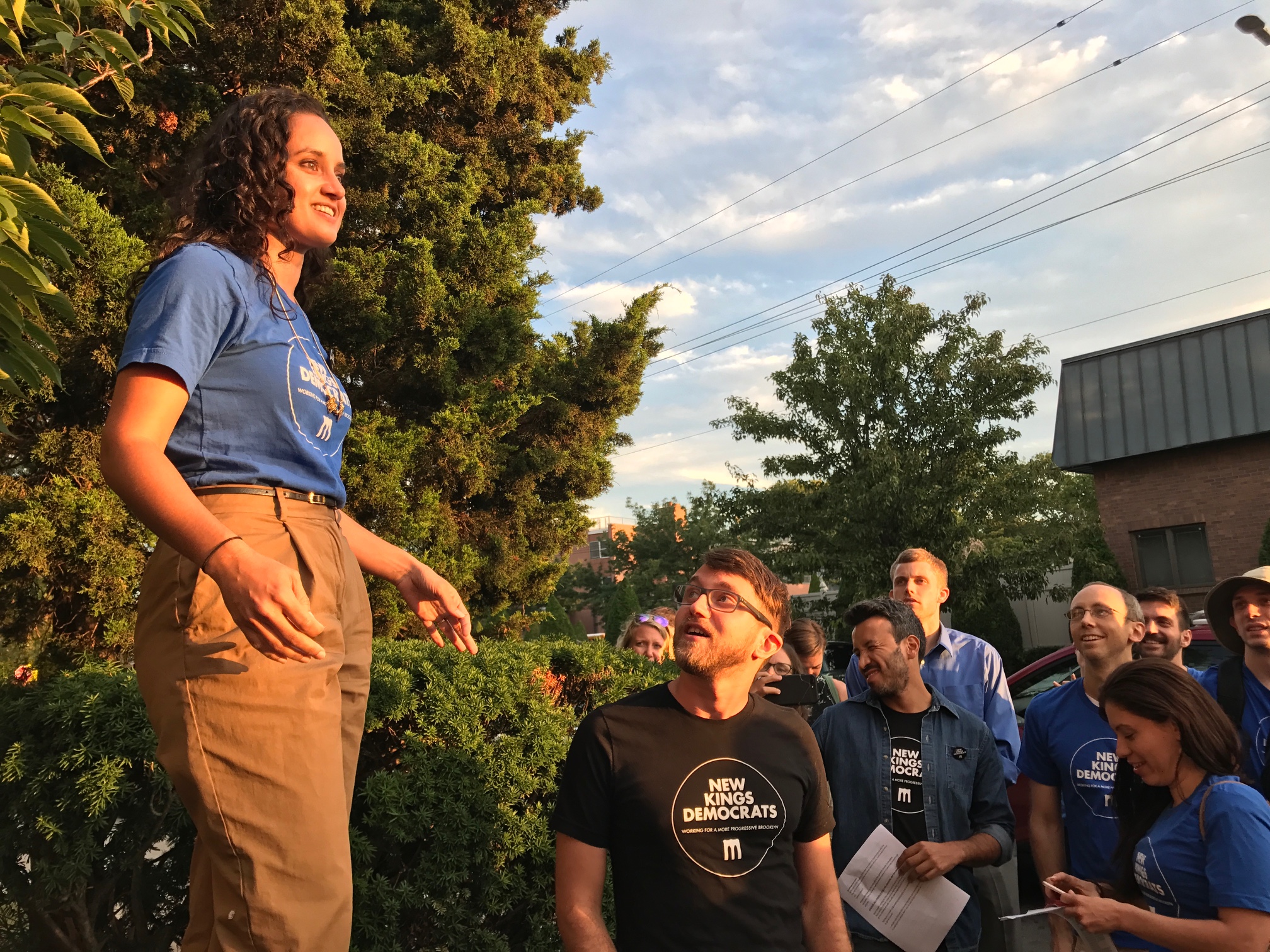 From the very start of the meeting, County leadership made it abundantly clear that they had no plans on making this meeting a participatory event. No agenda was provided in advance. And, when Acting Chair Jeff Feldman announced that the meeting would begin with a panel discussion, NKD President Anusha Venkataraman spoke up to request that the meeting first discuss the reform items. 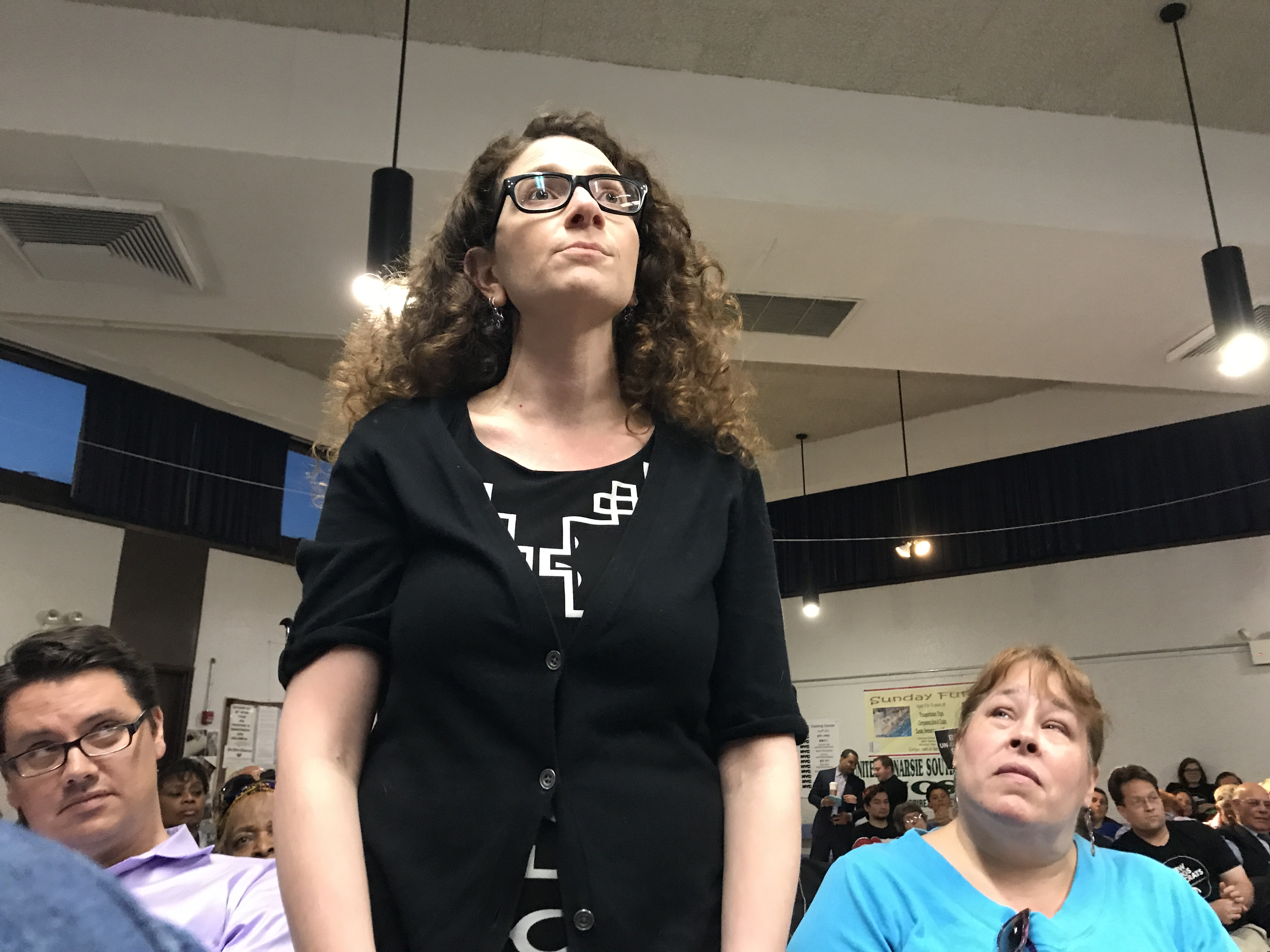 A chorus of voices echoed NKD’s call for an open discussion of the amendments. Lisa Levy from Bay Ridge Democrats jumped in to point out that the County rules require a discussion of committee reports, such as that produced by the Special Committee on Rules, before any other business is entertained. Hon. Lewis Fidler (State Committee Member, 41st AD, and Special Rules Committee Chair), who chaired the special committee, voiced his agreement that an update was needed. Stalwart Central Brooklyn organizer Ernest Skinner chided County leadership for failing to do more to encourage participation, and for not representing its voters: “One of the reasons that our national party is in disarray… is because the elders fail to listen to the youth!” Intergenerational cheers resounded.

A substantive and energetic discussion of the reform process followed. We learned that the Executive Committee had voted to pass four of the five rule changes, much modified from the version that NKD and other reform groups had originally proposed. However, through our efforts, several incremental but important concessions were achieved. Commonsense reforms were passed, such as a new rule forbidding County Committee from providing support to any politician or candidate who has been convicted of a felony due to corruption or malfeasance related to their public or party office. Additionally, the previous rule stating that proposed resolutions must be mailed to all County Committee members—which cost us thousands of dollars in postage!—was finally revised. However, several amendments were diluted or rejected outright: selection of judicial candidates will likely continue to happen behind closed doors, the Brooklyn Democratic Party will continue to refuse to provide basic support for Brooklynites looking to organize their own Democratic clubs, and unlimited power via the proxies of absent County Committee members remain in the hands of the Chair. The Party also took the opportunity to update a few other provisions of the rules, though these changes were not mailed to County Committee members in advance.

This rules update was followed by the scheduled yet unannounced “panel discussion” on the upcoming ballot question of whether to hold a Constitutional Convention in NY State. The panel only consisted of two invited speakers (Jason Goldberg of the UFT and Jordan Marks of New Yorkers Against Corruption), both of whom are opposed to holding a Constitutional Convention. They outlined the concerns held by their funders of the possible consequences of opening the constitution up for revision by elected delegates and subsequent public vote. A very contentious discussion followed, as NKD members—who passed a statement in support of holding a Con Con last year—and others asked why no one had been invited to speak in favor of Con Con, given that the Brooklyn Democratic Party has not taken an official position on this matter. County Chair Frank Seddio finally agreed that it was a mistake to have only invited one side and invited NKD’s VP of Policy Brandon West onto the stage to speak in favor of Con Con.

Brandon pointed out that past conventions have only ever added (and never once taken away) benefits like public-employee pensions and environmental protections. He noted that a Con Con could add further protections and reform our expensive and convoluted court system and dysfunctional legislature. Brandon also reiterated that anything the Con Con produces would go back to the voters for a statewide up-or-down vote, so a majority of New Yorkers can reject any destructive changes. Further discussion followed, with other community groups and individuals voicing their opinions—democracy in action! Chairman Seddio proposed that County hold another event in October to discuss Con Con, and suggested the Party produce materials that present both sides of the issue. NKD offered to help create this balanced, informational guide. 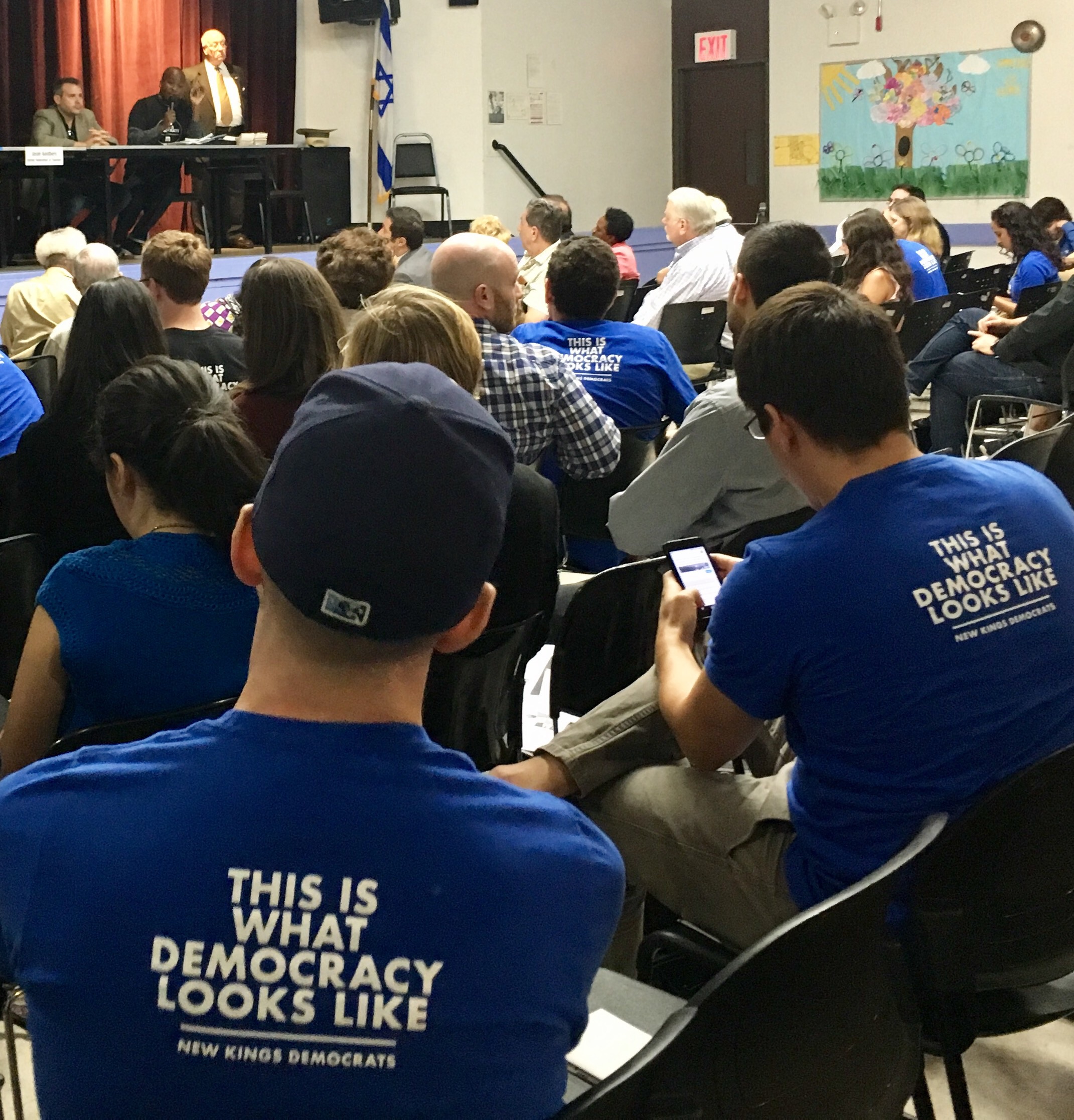 NKD members left the meeting feeling that our strong showing and persistence had turned a stale presentation by Party leaders into a lively, democratic conversation about current issues and structural problems. As the Hon. Annette Robinson (State Committee Member and former Assemblymember, 56th AD) stated Wednesday night, Brooklyn is one of the largest counties in the nation, and a bellwether for our country. Our Kings County Democratic Party has a long way to go before it represents the progressive values of the borough, but through our #RepYourBlock campaign, we are inspired to recruit and support more County Committee candidates in 2018 than ever before. And we will continue to build coalitions with other clubs and voters to push for policies, processes, and County Committee meetings that allow meaningful opportunities for participation. This is how we rebuild the Democratic Party, from the ground up. We hope you’ll join us!

Thanks to Tony Melone for his help writing this recap!