The Party Should Stay Out of Primaries

Party leaders often work behind the scenes to provide support to incumbent elected representatives, but this year the leaders of the Brooklyn Democratic Committee made their preferences unusually explicit — taking the problem of Party involvement in Democratic primaries to a new level.

This week, Assembly Member and District Leader Rodneyse Bichotte, who was elected as Party Boss in January, issued a press release noting Party leadership’s endorsements in a wide range of contested Democratic primaries in Brooklyn. Even more notable is the deluge of mailers the Party paid for and sent out in support of Bichotte's endorsed candidates throughout Brooklyn.

These tactics suggest that the Brooklyn Democratic Party is working for favored Party insiders and not everyday Brooklyn Democrats — which is why New Kings Democrats condemns these actions and advocates that the Party stay out of primaries and allow candidates to run on an even playing field. 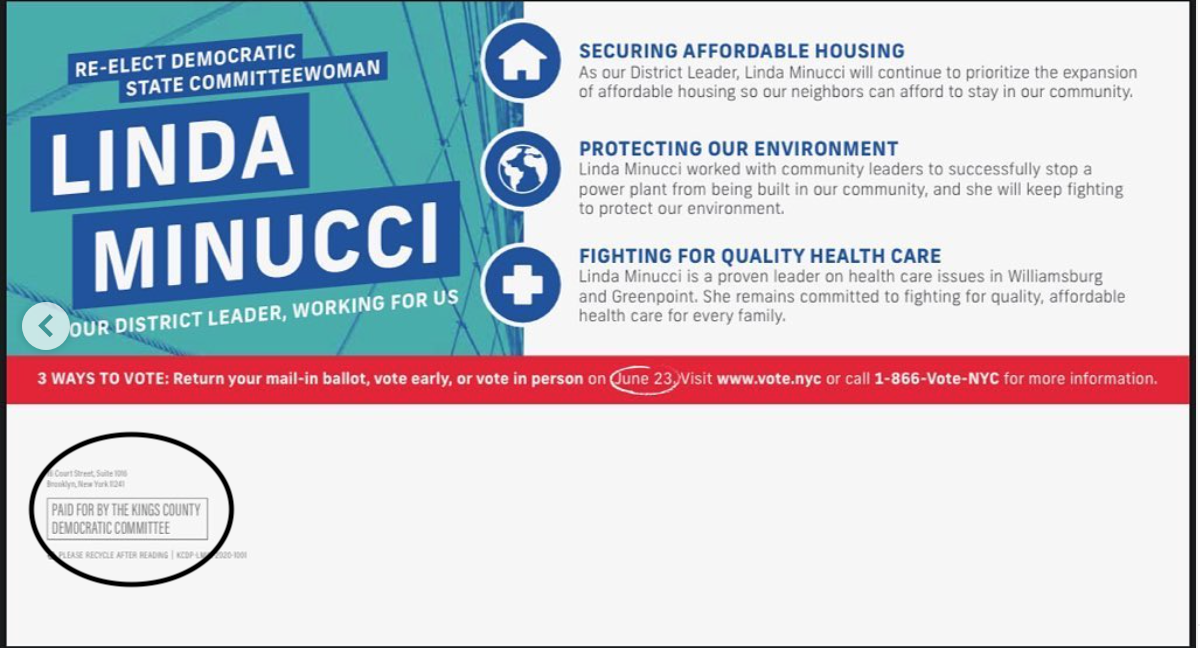 The mailers that the Party sent out on behalf of many of its endorsed candidates appear to go beyond the unethical. All of the ones we have seen are stamped, “Paid for by the Kings County Democratic Committee,” yet there are no records of these payments in the Party’s campaign account, where it is required to disclose all of its spending to support campaigns. We demand that Party leadership provide an explanation for its failure to disclose its spending on behalf of its preferred candidates.

It is jarring to see the Party pour extensive resources into primary races while claiming to be in too dire a financial state to perform its basic functions — printing and sending these mailers costs thousands of dollars. Earlier this year, the Party’s small Executive Committee — in a secret vote — changed the rule that required the full 5,000-person County Committee to meet twice a year, lowering the requirement to once a year. Leadership claimed the change was necessary because of strains on the Party’s finances. Rather than spend its money on creating spaces for its grassroots membership to convene, or organizing around important initiatives like the Census, the Party is now devoting its supposedly limited funds to its preferred Democrats in Assembly and District Leader primaries.

And while we do not believe that the Party should be endorsing in primaries at all, it is notable — and disappointing — that some of the candidates Party leadership has chosen to support also receive funding from real estate and law enforcement interest groups, and support policies that favor those groups, rather than the interests of everyday Brooklynites.

This dynamic is playing out very clearly in the race for Assembly Member in the 43rd AD, the one contested race in which Party leadership failed to endorse an incumbent elected official. Assemblymember Diana Richardson, who is being challenged by former State Senator Jesse Hamilton, has been a tireless advocate for reform to New York’s rent laws. She is perhaps the only elected in the state to treat her constituents to monthly civics lessons. Hamilton, on the other hand, is a former IDC member who helped keep Republicans in control of the State Senate for years, blocking progressive legislation in order to get more money and power for himself. For Party leadership to speak up on behalf of the incumbent in every race but this one — where the challenger candidate was recently aligned with the GOP — confirms that Party leadership’s endorsements have more to do with personal relationships than the best interests of everyday Brooklynites, or even the best interests of the Democratic Party. This makes the endorsements all the more unacceptable.

We will continue to push Brooklyn Democratic Party leadership to remain neutral in races between Democrats, and we look forward to electing new Party leaders on June 23 who will fight for Party reform from the inside.