What Happened At County Committee? Looking at the Data, Part I: Proxies

This post is part of a series of blogs posts from New Kings Democrats about what happened at the first County Committee meeting of the 2018-2010 cycle.

At the September 27 Kings County Democratic Party (hereafter, “County Committee” or “KCDC”) meeting, there was a contested election for leadership positions of the County Committee. In the room were 541 duly elected members of the County Committee -- by all accounts, more than ever before thanks to hundreds of new KCDC members running for a seat through the #RepYourBlock campaign and the efforts of reform-minded clubs across the borough.

A vote was called for members to support either the slate of candidates put forward by the establishment of the Brooklyn Democratic Party, or new candidates for each of the 13 positions, put forward by a diverse coalition of progressive reform groups. The chair of the meeting, Martin Connor, asked for everyone who supported the Party’s slate to stand, and two tellers started counting votes. 50 people stood. The other 491 people in the room remained seated. Connor announced the Party’s slate had won.

The Party won because it had, according to Connor, an additional 550 proxy votes cast by Party “boss” Frank Seddio, given over by people not even at the meeting. A stack of paper in the lobby, he explained, contained enough votes to defeat the hundreds of local activists who had traveled down to Manhattan Beach to represent their new constituents.

Now, the concept behind proxy votes is not unreasonable. If a person cannot attend the County Committee meeting -- perhaps for any number of good reasons such as work, family or disability -- they can give their vote to someone who shares their values and will vote for them “by proxy.” Fill out a form, write your friend’s name on it as your proxy, sign and date the form, and it’s done.

But at the County Committee, proxies are not used as a backup option. Even with the massive new turnout this year, there were still more proxy votes than there were people in the room, and the large majority of those proxies were given to Seddio or his allies. Here’s how their strategy works. 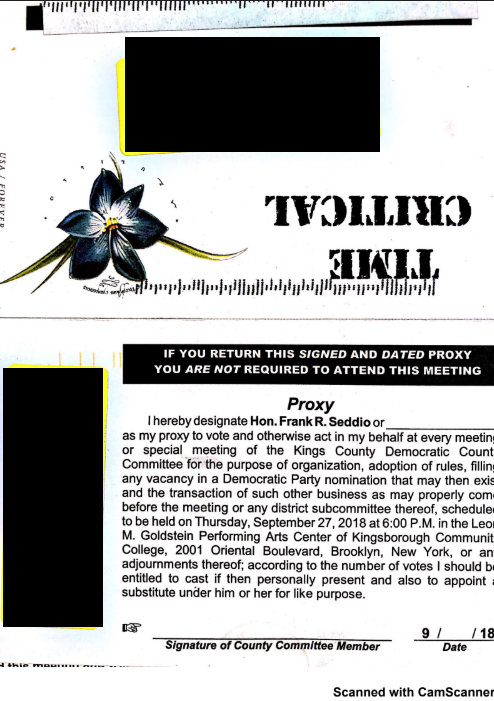 “You are not required to attend,” the card helpfully explains. Unless a County Committee member actively writes in someone else’s name when filling it out, their proxy is assigned to Seddio.

There are about 2,200 members of County Committee in Brooklyn, and typically only a small minority of them attend the meeting. That disengagement is no accident on the Party’s behalf, and the lack of attendance turns votes at the County Committee into proxy-gathering competitions. Historically, the votes in the room at County Committee never matter because enough proxies have been collected beforehand to overrule any in-person coalition.

But at the meeting on September 27, it seemed like the votes in the room might matter, potentially for the first time ever. Because when Connor announced that there were 550 proxies for the county candidates, the numbers did not add up. Those 600 votes were not a majority.

For our investigation of what happened at the meeting, and who actually won the election, look for Part II of this series -- coming soon.