What Happened at County Committee? Looking at the Data, Part II: The Count

This post is the second of a series of blogs posts from New Kings Democrats about what happened at the first County Committee meeting of the 2018-2010 cycle.

There was an actual contested election at the last County Committee meeting of the Kings County Democratic Party on September 27. But it went off the rails quickly because the numbers announced did not add up to the result proclaimed. We visited the Party's offices the Monday after the chaotic meeting to try to get to the bottom of what happened. With the physical record of the vote, New Kings Democrats has been able to produce our own estimate of the final vote total, identify the main reason the count at the meeting kept changing, and distinguish the crucial votes that won a majority for the establishment's slate.

At the vote for the County Committee’s leadership, just 50 people in the room stood to vote in favor of the Party slate. The chair of the meeting, Martin Connor, announced that another 550 proxy votes, held by Party boss Frank Seddio, had been cast for this slate, giving a total of an even 600. Those 600 votes would be more than enough to beat the 491 in-person votes for the reform candidates for the leadership positions, if every one of the remaining 491 people in the room voted for that slate.

See Part 1 of this series, an explainer of what a “proxy vote” is and how important they are to votes in County Committee.

However, the Party (“County” in the graphics that follow) was not the only group that carried proxies. New Kings Democrats, along with other progressive clubs across Brooklyn, sent out their own proxy mailer to draw members’ attention to the 13 candidates for the officer (leadership) positions and let people know they had options when it came to assigning their proxies (and that attendance and participation were preferred). NKD delivered at least 130 proxy votes for the reform candidates. If that had been the number used, then the reformers would have won. 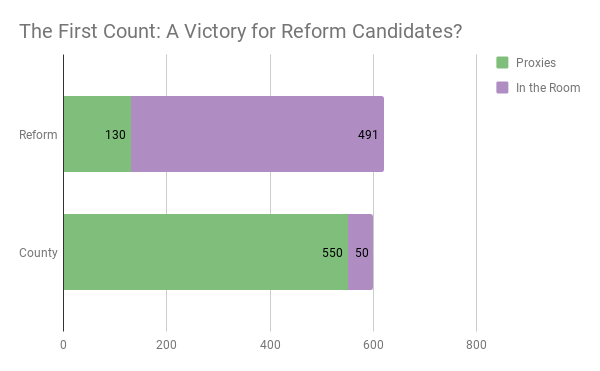 But here’s the first wrinkle. The proxy numbers used to determine the outcome of the votes at the meeting (and used in the table above) were not complete counts, but rather, estimates. These estimates were used based on an agreement reached between NKD President Brandon West and the Party’s Executive Director, Jeff Feldman. NKD agreed to these numbers because, by that time, it was 8:30 PM -- over two hours past the time when the meeting was supposed to begin -- and the actual counting of the proxies was still not complete. (The Party did not provide enough people or mechanisms by which to accurately count the proxies efficiently, as the process was bottlenecked with one laptop being used to scan in each proxy individually.)

West and Feldman agreed to stipulate to the number of proxies the other held, based on their best estimates: 550 for the Party (“County”), and 130 for the reform coalition. This way, the meeting could begin.

Clearly the first announcement of vote totals by Connor was incorrect, which he acknowledged later in the meeting. It could not be the case that the County slate had won with 600 votes because the reformers had 621. But crucially, these numbers were not based on a precise counting of all the actual votes.

At this point, the meeting adjourned for judicial appointments, a process that took over an hour. County Committee members not called to discuss and vote on judicial appointments were left confused in the assembly hall, wondering who had won the vote. Outside in the lobby, the actual counting of proxy votes continued.

When Connor brought the meeting back to order, a re-vote was called. In this new vote, Connor claimed 750 proxy votes for the Party slate, a clear majority. The counting during the adjournment had turned up, apparently, another 200 votes. 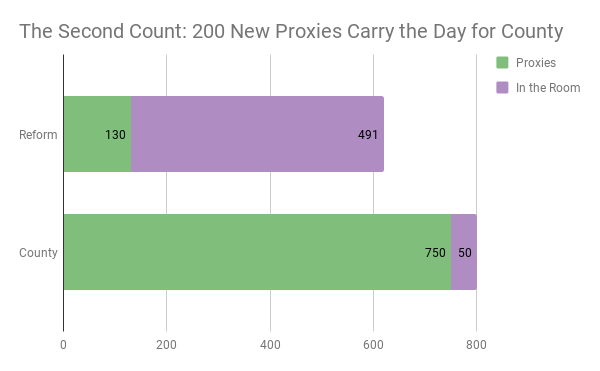 But anyone in the room had to wonder: Was this new count correct? How had the Party under-counted their own vote strength by 200 votes?

In fact, it was clear from the announcement that this new count was also incorrect. Connor announced there were 1,370 total votes, between proxies and people in the room, and that 750 of these were proxy votes for the county slate. But if the County slate had 750 proxy votes, plus 50 votes counted in the room, that would leave only 570 votes for the reform candidates, an undercount of at least 50 votes. (For the graph above, to avoid confusion, I chose to ignore the 1,370 total vote number because there must have been a mistake.)

This eight-minute video clip from the meeting shows Connor acknowledging the errors in the first count and providing the newly incorrect totals of the second count. Fortunately, Connor also announced that the proxies themselves, the physical record of the votes, would be preserved at the County offices and available for perusal.

I led a team to go in on the next Monday morning and record them all. The proxy votes were mostly stacked in these two boxes, although a few others were scattered elsewhere. 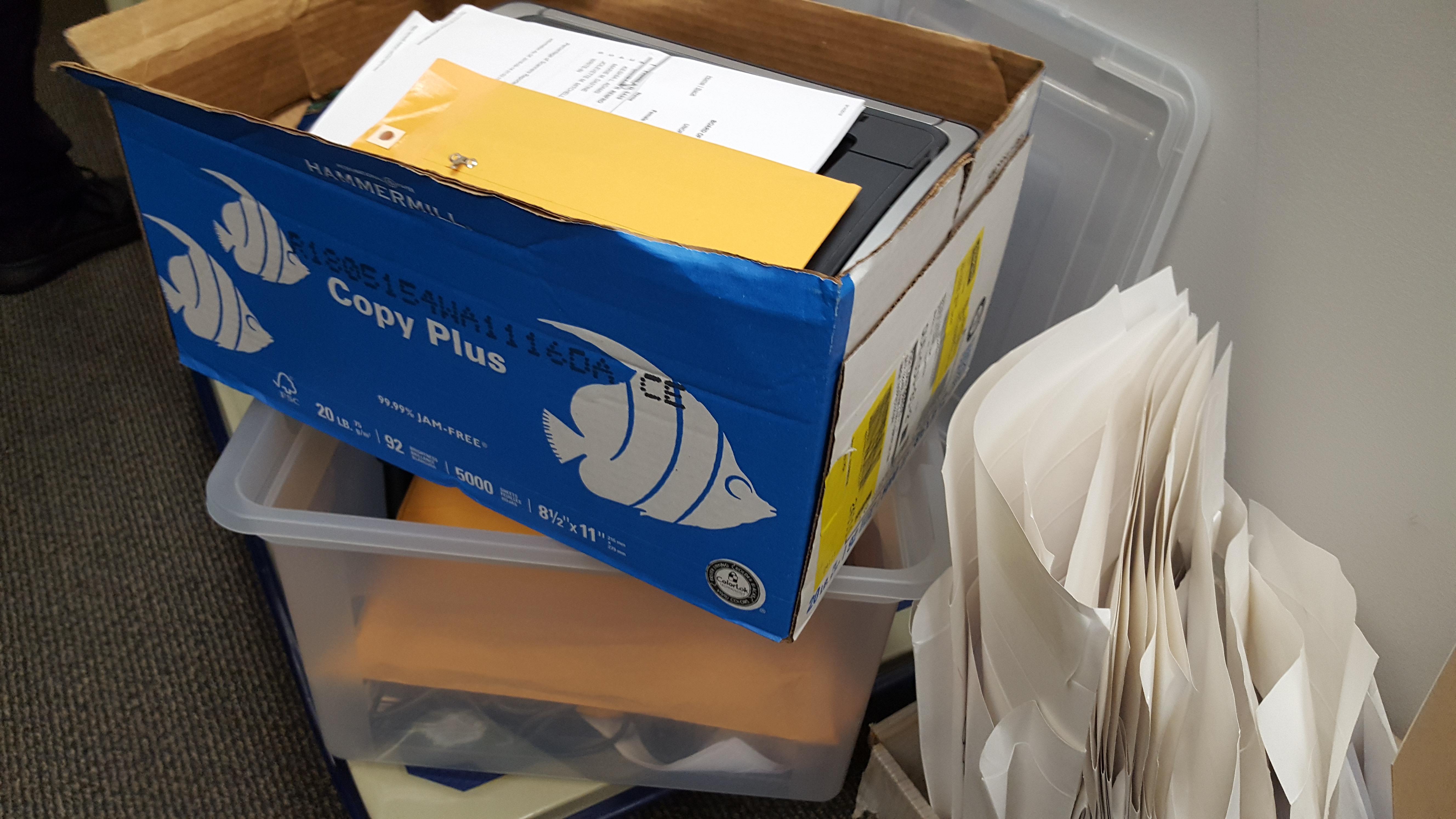 Now, with these proxies recorded, NKD could recreate a nearly exact count. The only remaining uncertainty is whether some people who turned in proxies also attended the meeting, which would invalidate their proxies. But this is probably as close as we’re going to get to knowing what happened at the meeting. It appears the Party really did win, and they really did have close to 200 additional proxies correctly included in their final total.

Our best estimate does not get the County slate all the way to 750 proxies, but they did add 184 new proxies and that would certainly be enough to win. 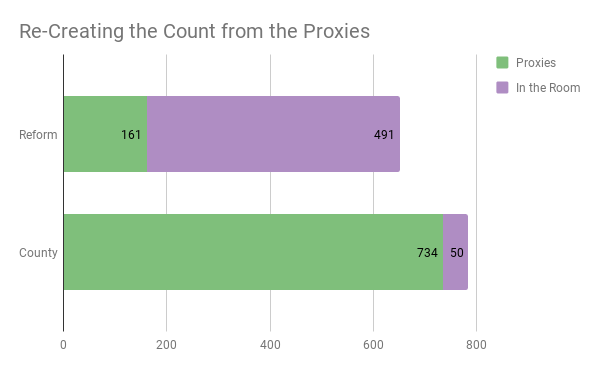 And there is a good explanation for those new 184 votes, too. This is the second wrinkle. Only a small number were undercounted proxy votes for Seddio himself. Most of the additional votes came from proxies given to other Party leaders, who provided their votes to the Seddio-backed County slate. During the announcement, under a clear challenge from the audience, Connor gave a partial list of the additional proxies on file cast for the county slate. These were the deciding votes.

There were 550 proxy votes given to Frank Seddio, which he claimed in the initial conversation, and then another 50 discovered through the count. This is not so dissimilar from what happened with the reform proxies -- West agreed to claim 130, but the final total was more like 161. The difference was made by the proxy votes cast by other Party leaders, not by Seddio himself. 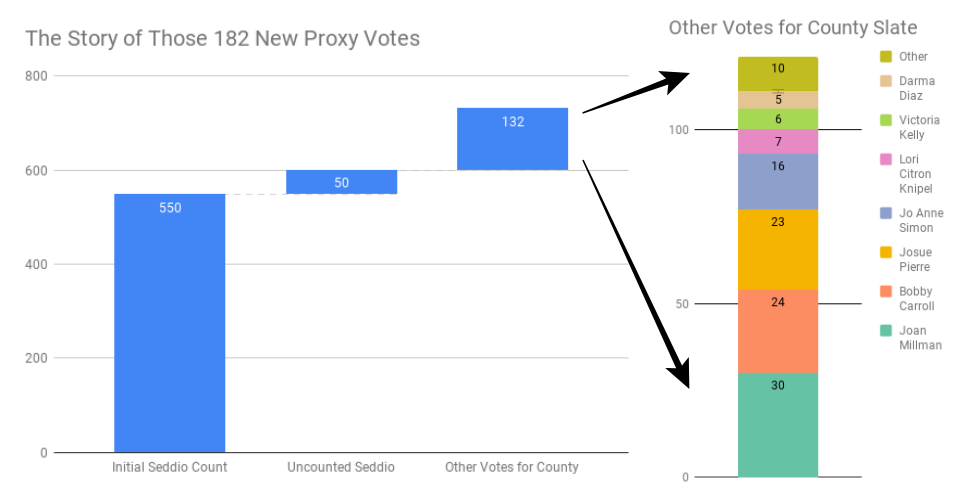 Most of these added votes came from four people: Jo Anne Simon and Bobby Carroll, Assembly Members from the 52nd and 44th Assembly Districts; Joan Millman, former AM from the 52nd AD; and Josue Pierre, District Leader in the 42nd AD. Connor listed most, but not all, of these leaders in his short summary of the proxies, and NKD added the others based on conversations with these electeds. While adding in these votes still does not get the full 750 proxies claimed, it’s pretty close.

So this is NKD's best guess as to what happened in the actual vote. Seddio himself did not have enough proxies in his name for a majority. But once the proxies given to other people were added to Seddio’s total and cast for the County slate, that was enough to win the election by a clear margin.

The proxy vote data does not just tell us what happened in the election, it also tells us a lot about how proxy collection happens and where the Party establishment draws its power. Look for Part III on power and proxies later this week.